Dave Brockie of the Almight GWAR rocking A Band of Orcs’ shirt before the show in SF.

As always, here’s your humble journalist, delivering the 4-1-1 straight from the shit itself. We’re currently barreling down the 45 North outside of Houston, TX, on our way to a Guitar Center for supplies and to burn some time before the show tonight at the Warehouse Live. I have an expensive-ass cup of diner coffee sitting next to me and my belly is full with a croissant & scrambled egg sandwich topped with hot sauce and a side of grits. Real country grub is good for the soul, even if you’re traveling with a death metal band and you have to question whether or not you even have the damned thing.

Where did I leave off? Sacramento, right? Well, that was a few days ago, so I’ll do as much catching up as possible and dive right into the last few days.

After Sactown we drove through the night, trying to get as close to home as possible. Somewhere along the line we dropped Jesse off in Oakland so he could be with his lady, Lexi, who lives in the area. 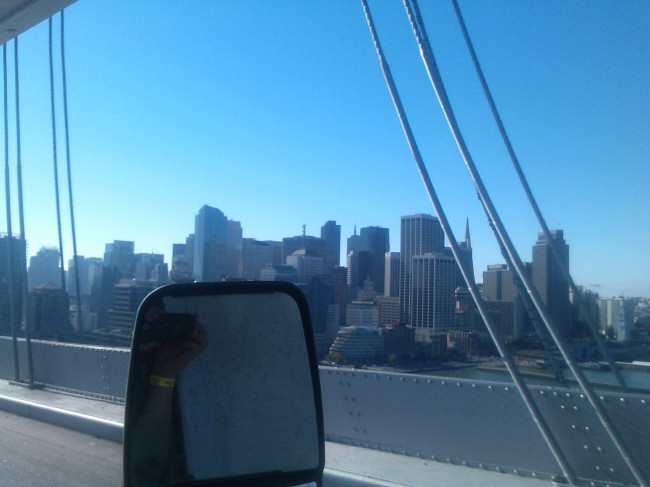 The city, she burns for me. . .she needs penicillin

I woke up in the parking lot of a Best Buy in Emeryville, had my morning cigarette, hacked up the day’s lung butter and walked with Oog to Panera Bread for some coffee and the toilet, not in that order. After everyone had their eats and morning ritual, we were hit up by some self-proclaimed, “totally normal” crackheads who were looking for “only $11 so I can buy my medicine,” and I knew we were back in the Bay.

San Francisco. Ooooohhhh San Francisco. You’re a helluva city, you know that, right? The air had a bite to it like no other. A real San Franciscan October night; fresh with the adventures of the sea, and as old as the ghosts that haunt it.

The tour was hitting the Regency Ballroom, an old dancehall built in 1909 and is a “fine example of Scottish Rite architecture” according to their website. The massive stage, hardwood floors and 22, turn-of-the-century teardrop chandeliers are clearly too nice for modern times, and one can imagine the Regency being a really swinging jazz hall at one time. But tonight, it was home for metal, blood, Orcs, and space aliens. Just another night in SF. 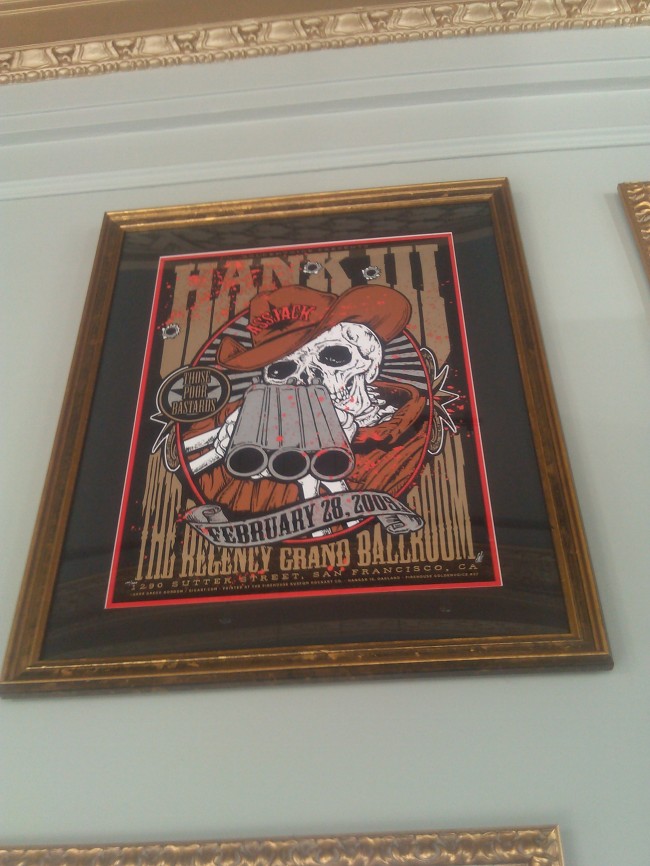 Hellbillies Representin’ at the Regency 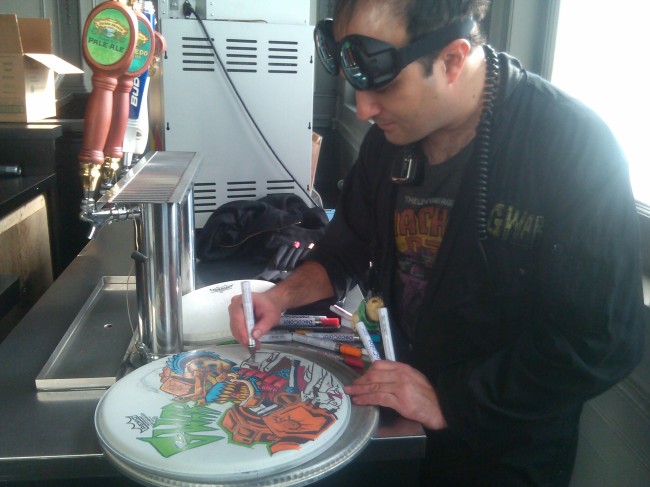 Matt customizing a Gwar drumhead to be sold.

From the moment we arrived, it was a hustle to unload, organize, set-up the merch/instruments and the dreaded search for parking in a city built for horse-drawn carriages. Luckily, there was a spot directly across from the Regency, on the other side of Van Ness Blvd. With a little luck and a lot of time playing Frogger as a kid, I was able to maneuver everything into the venue just in time to eat.

By nightfall our friends began pouring in and it was a regular party inside the Regency. Friends, girlfriends, wives, family members and coworkers all showed up to support A Band of Orcs and be splattered in blood. Unfortunately as with every show so far, the ticket times and the actual doors were different and several of our friends missed the Orcs. C’est la vie. 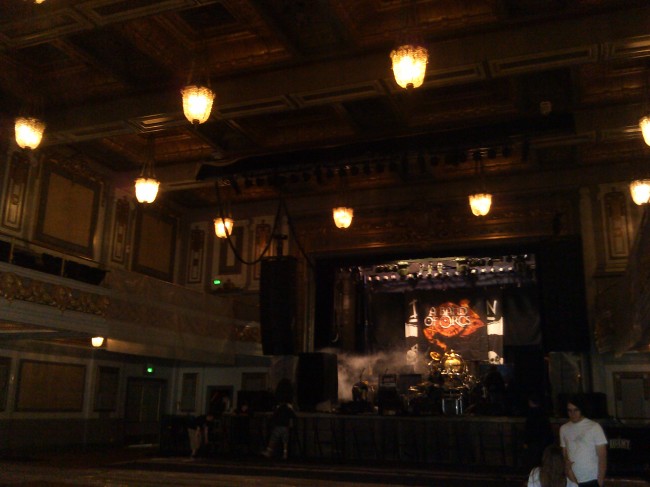 Because the merch room is separate from the main hall, I spent the evening behind the booth, talking with Carlee (Iron Reagan’s merch girl for those of you just joining us) and Wyatt (Whitechapel merch guy), and hanging out with my Santa Cruz friends, Brian, Caroline, Rob & Chris. I was excited to be at the Regency from the crew side. Three years ago I had the chance to interview GWAR at the Regency for Rabid magazine, and while I can’t deny a backstage press pass, it was good to get the crew’s perspective. Truly immerse myself in the chaos, real gonzo journalism.

However, that’s not to say I didn’t see my fair share of entertainment because Will was there; the baldheaded, pill dealer who “swear to God knowns Oderus. Just ask him!”. Jesse and I got our first taste of Will In Sacto, when he walked up to our RV exclaiming, “I’m gonna draw on your vehicle.”

Will’s face turned as white as his goatee and his eyes grew huge partly out of exaggeration, partly out of real fear and the rest because of the drugs he was permanently on.

“Aaaaawwww, naawww, come on man. You wouldn’t do that, WOULD you??? Not the cops, I got pills and I know GWAR!”

He spent the next ten minutes explaining to us about all of the bands he’s worked with and how he’s more “one of [us]” than we realize. My first thought was, “Ye gods, I hope not.” The rest of the night in Sacramento was spent with Will running around in a drunken ball of chaos with his promises to show up the next day in San Francisco, even though I was a dick to him with every interaction.

He might be annoying as hell, but I guess he’s honest about his promises, “especially when there’s a free show and beer involved,” he later told me at some point in the Regency. I don’t remember if it was before or after he started running around the merch room, chasing after an equally drunk, looked like she was prone to a pill or six, middle-aged woman. She was yelling at him for something and as an apology, Will was throwing himself on  the ground, proposing and begging for her forgiveness. She saw her opportunity and started shouting, “Well, as long as your down there,” spreading eagle about his shiny bald head and missing teeth smile. This went on for several minutes, with her running around the room in a circle, and Will throwing himself down every few feet with a pleading, “Naw, I’m sorry baby! Come on, let’s get a beer! You love beer! Naw, come on.” After 5 laps around the room, she exited and he followed, crawling on his knees with his hands in the air. I don’t normally say this, but sometimes drugs can be dangerous kids. Don’t be like Will. 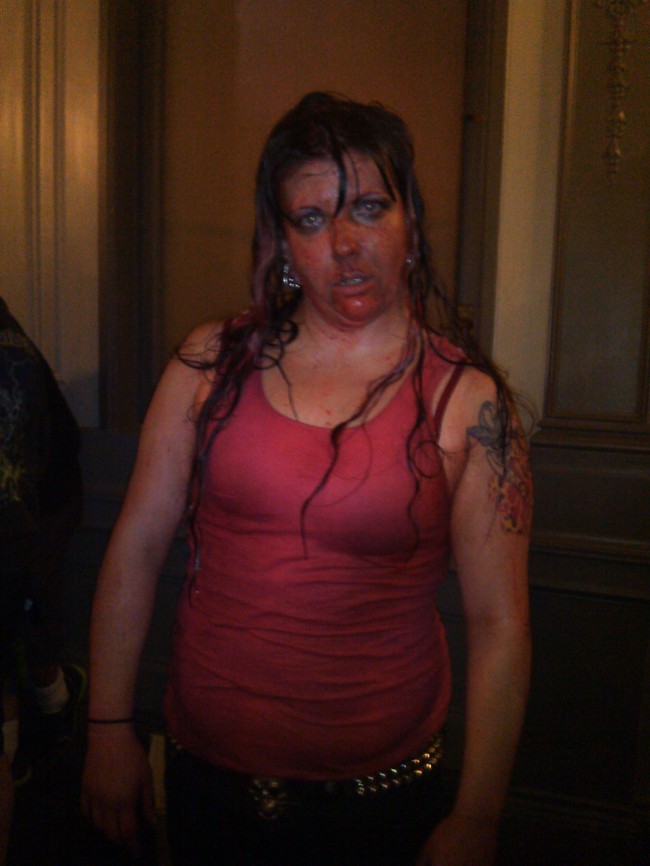 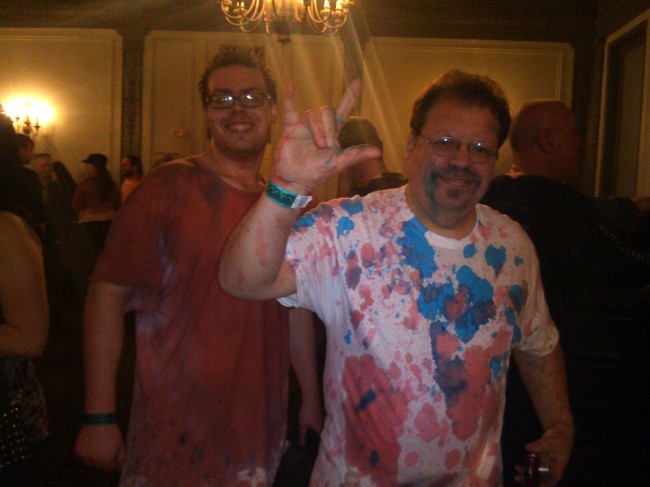 When the show was over and our friends were sufficiently drenched, I tried to pack up as quickly as possible so I could hang out, but was delayed first by the stage manager for merch pay out, and a second time after loading-in when I discovered my tour laminate had ripped off my key chain. After some frantic searching, I discovered it on Van Ness, but by then it was late and everyone was departing. Brian had agreed to take me back to  Santa Cruz for the night and A Band of Orcs all agreed to meet at the RV rental place the next day in Newark at 11am. After a couple hours there, they’d go to SC, do laundry, empty things in the trailer we don’t need, pick me up, and hit the road in the early afternoon. Ho ho. 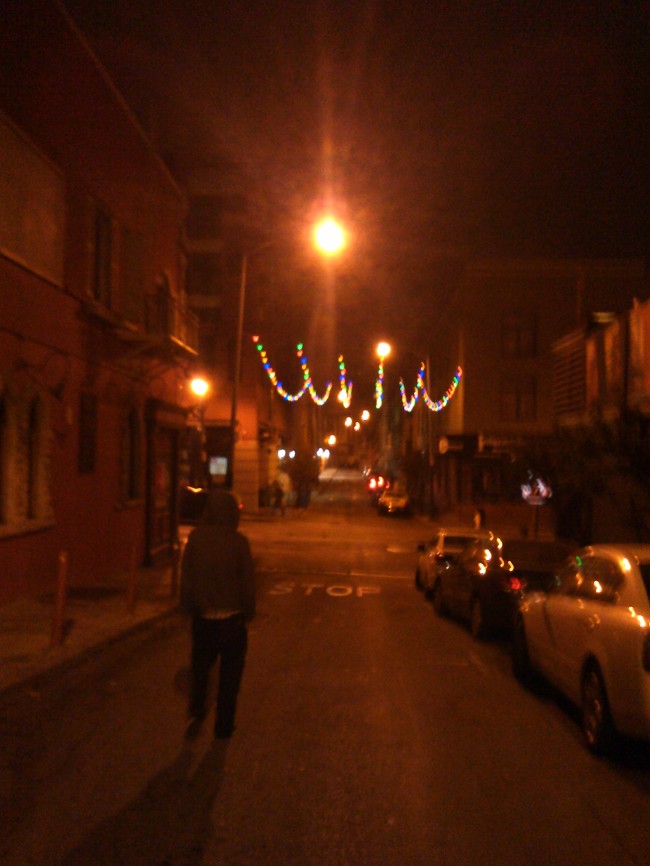