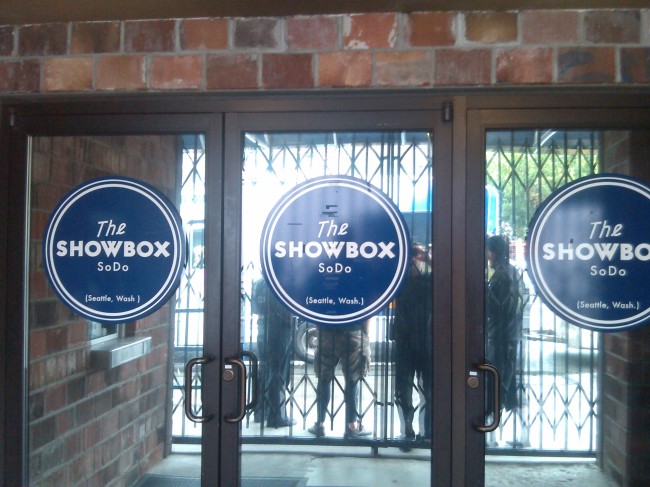 When my plane landed in Seattle I was running on hour 24 of being awake and starting to feel the zombification process taking over. As Jesse Williams–fellow roadie/merch slave/road dog & my friend/co-worker at the Blue Lagoon—later said, “You might as well start a tour haggard and exhausted, because you’re gonna end up there anyway.” Praise Jebus and pass the ammunition.

I quickly stumbled through the Sea-Tac airport, staring at the flashing, neon signs inviting me into their doors with the promise of expensive shots, fresh fish and a Starbucks in every other stall of the food court. A capitalist foodies Disneyland, nicely accented by the rain-filled skies looming through the airports glass walls.

Grabbing my bag I made my way to the opposite side of airport and jumped on the light rail towards downtown Seattle. Automatic pilot had kicked in completely wiping my mind from registering that I was raining out and probably not the best time to walk a couple miles to a venue I had never been before, in a city I haven’t entered in 20 years.

Any insomniac or crazy will tell you, just because we’re here doesn’t mean we actually are. Once zombification sets in, there are two choices: sleep if you can, or do whatever you can to get the job done. Keep going, rationality be damned.  Once you push past the 3rd or 4th wall, reality slowly turns into a movie showing for an audience of one very tired conscious, slumped somewhere deep inside your brain. The first time it happens you begin to question your sanity, but once you reserve the seat, frequent viewings are much easier to manage and soon you become a functioning madman, all muscle memory with no notice of the outside world, especially one involving a walk in the rain with only a jean jacket.
“Sure,” I thought. “It will be wet, but I won’t even notice from the insomnia. Thank God for the little things.”

Five minutes into my 30-minute trek the wind began to howl like a rabid banshee and her shriek crept into my bones with a bitter jolt I haven’t felt since the last time I was tased, and all senses roared to attention. By the time I reached the venue I had racked up three failed attempts to find shelter and a bathroom and I was cursing every last living thing in that godforsaken city down to the last frozen earthworm.

The doors to the Showbox SoDo were, naturally, closed at 11 am, so I decided to walk down the street and try once more to find some form of shelter so I could call the guys and find their ETA. As I walked by a parked RV, the driver began to stare at me and I could feel the hairs on the back of my neck raise. I flashed him the stink eye, holding back no hate for this Washingtonian and his suicidal city and just stared at him with a cold-dead look. After all, who the fuck was he to be staring some poor bastard stranger down, who obviously has no common sense in Seattle, walking down the street like a drenched alley cat.

“Fuck him,” I thought, “Let’s make this real and show him a sense of California.”

I probably stood in the rain for half a minute, staring with daggers, before I realized it was A Band of Orcs’ drummer, Kyle.

The band had arrived a few hours earlier from Canada and had just woken up after a long night of travel. I set my bags down and they began to fill me in on the previous two weeks list of adventures. The Canadian shows were great, the country’s money is ridiculous; one of the band members had already backed the RV into a dumpster, ripping some of the side paneling; everyone was tired, cold, dirty and ready for clean laundry.  By this point the tour was already 2 weeks in, so the crew and bands already had time to bond and party, so Jesse guided me through the merch set-up, my responsibilities, and introduced me to a blur of people who I immediately forgot in my daze. They set me up with my tour badge so I could feel bonafide and sent me on my way.

As night fell and I was rounding on hour 32 of no sleep, I fell nicely into tour mode with the rest of them—tired, dazed, chuckling at things that weren’t funny to anyone else but a sleep-deprived soul, and living on a steady diet of cigarettes and fresh coffee from the club.

Beyond that, this reporter can’t recall any specific details about that first night. My recollection is a blurry collage of movement and colors with dialogue floating somewhere in the background–like a TV at full volume in the locked room next door—all showered in a flood of fake blood from GWAR’s set. We packed the trailer, said our goodbyes and headed east towards Boise, Id.

I was so delirious when we left that I agreed to ride shotgun and keep Jesse awake while he drove through the night. Which (probably) would’ve been fine if the GPS had not decided to get us lost down an unlit trail with a cliff on one side and a river on the other, making it impossible to turn our RV & trailer around and leaving it up for Kyle to drive backwards for a mile back onto our original destination.

It was somewhere around hour 42 when my brain finally pulled the plug on my whole plan, and shut me down for six hours of glorious, glorious sleep.