I awoke with a ferocious jolt out of a deep sleep, flying somewhere through the Andromeda galaxy from the night’s previous cupcake.

We had stopped in Weed, Ca. to change drivers, stretch our legs, and take the mandatory, juvenile, stoner pictures with the Weed sign. The sun was just creeping up Mount Shasta over the horizon and everything was baked in a golden hue warm enough to thaw your marrow. Our home state’s own welcome just for us. We’ve missed you too, baby. 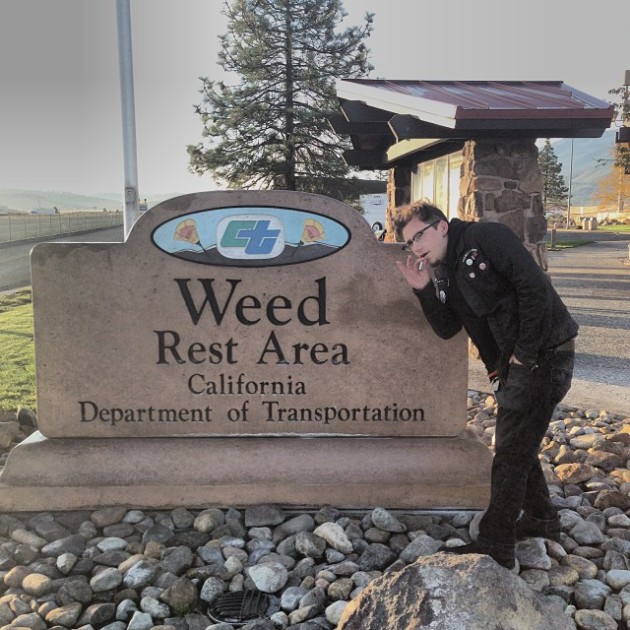 After a quick smoke and stretch we hit the road again, this time I road shotgun to keep Gronk (the bassist) awake while the rest slept. We twisted through the mountains listening to Bad Religion and Metallica in honor of California, discussing our favorite albums and catching glimpses of whatever lakes we were passing. We were on our way to Chico, and the quicker we arrived the more hours to ourselves we would have.

We pulled into town around 10:30 hungry for food and adventure. While Gogog, Hulg, Gronk and Jesse slept in the RV, Oog, Cretos and I went to explore Chico in search of some trouble.

More inland than most routes on the streetkid transit, Chico is still a frequent transient stop up and down the state because of it’s small, college-town vibe and large, flat spaces for people to crash in the open air. Large groups of squatters littered the streets and I couldn’t help but feel almost at home.

The main area of downtown Chico is somewhat larger than Santa Cruz, but smaller than Santa Barbara and easy to get around, and we quickly found a great sandwich deli that built the bastards to the sky. For under ten bucks I had enough food to last me  until dinner and enough change to afford a pipe for the road and a present for a certain someone.

After a fruitless search in the local record shop, we walked back to the RV, where we spent the next several hours bullshitting around, smoking, drinking and enjoying an actual moment of downtime on a breezy California day.

The Senator Theater is an old movie house that has long since had it’s screen removed. The entrance is a grand hall, garnished with ornate murals, mirrors and once-gold-but-yellowed-with-time trim around the molding. One could imagine all of the timeless films opening there throughout cinema history, as the building slowly aged and the town around it began to expand until finally the movies were out and blood-spewing metal was in. C’est la vie.

Chico is also the home to our good friend, Tessara, who Oog and I know through the Stellar Corpses, who she does merch for and also dates the singer, Dusty. She showed up a couple hours before the show, just as we were loading-in, so we were able to catch up for a bit and get her in to watch the sound check. She filled me in on the happenings around Chico, the closing of the good dive bar, the 411 on the fans, who was who in the local scene, and all of the other important things to know about the city you’re in. 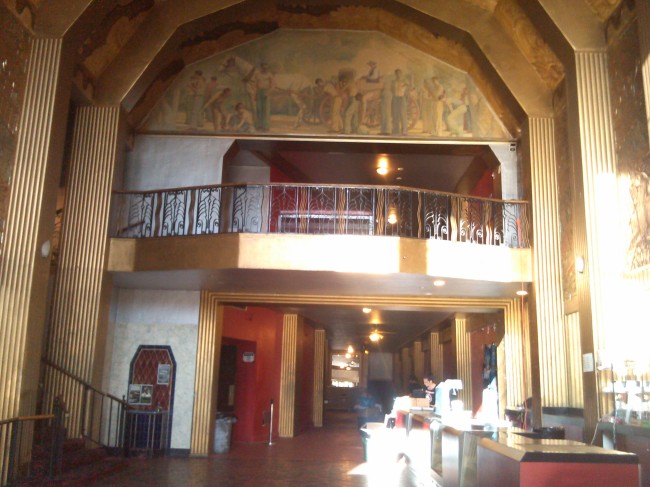 About 30 minutes before the doors opened, we received our daily payment and immediately Jesse and I set out for dinner while the Orcs finished their soundcheck. There was a Woodstock’s pizza a few blocks up but we were sidetracked the first time because of faulty directions, and a second time because of the local kooks. Within minutes of turning around, a bowl-cut dready with a few weeks of baked on dirt and a pen-n-poke Juggalo Hatchetman tattoo on his arm, came riding on up his bike.

“Hey! You guys look like you’re lost. What can I help you with?”

By the time he was finished I had already taken my GPS out and discovered the REAL route, quickly turning to walk away. If you’ve ever had dealings with a kook, you know not to look ‘em in the eye and walk away as soon as possible before you’re dragged into a full-on tweaker rant about how his baby’s momma is a stripper but she won’t be stripping no more now that she’s pregnant with his kid and can he have $5 for food when the baby comes and definitely NOT crack because he’s done with all that now (*side note: that was a real conversation with a crack head as we were leaving Portland. The more you know. . .*)

“Well, wait!” the dready yelled, riding up to his.

“Ye gods, what did we do to deserve this?” I prayed.

“So,” he said slowly and deliberately, trying to remember his whole pitch. “I’m not asking for money, but I’m starting this new thing called the Positive Manifestation Station and you’re my first clients. I’m just giving out cigarettes to everyone but I don’t want any money. Just a donation of change so I can keep this up.”

“Got it,” Jesse repeated, “Money bad, but donations good.”

We didn’t give him any change and we didn’t take any of his smokes, but that’s a damn fine sales pitch if you ask me. Hell, the churches have been doing it for years.

Besides the usual brand of GWAR fanatics all in new, white shirts or red stained tees from previous tours, there was one other fan who stood out and that was Shitty Titties.

Carle was the first to notice her. A veteran to the touring circuit, Carle has toured with a grip of bands, and before working merch for Iron Reagan on this tour, she just finished the Warped Tour with Whitechapel’s merch guy, Wyatt.

“Dude,” she said pointing to a 5’4, curvy blonde girl with a black shirt and blue jeans. “That girl’s shirt says, ‘Poop.’” Sure enough, in giant white block letters across her chest, glared the fecal word in all of its glory. The girl overheard and quickly turned around.

“Yeah, like shit, get it? Just call me Shitty Titties! Wooo! Rock on!”

Carle, Brent Purgason (Cannabis Corpse, GWAR) and I all looked at each other for a minute and just lost it with laughter.

Unfortunately, since the Senator wasn’t initially meant for music, the merch booths were set up along the concession counter, and we were cut off from the bands. Tessara hung out with me during Iron Reagan and Whitechapel, and we talked with the house’s concession girl, Maria, about Chico, the theater and favorite shows she’s seen there.

Chico is no Santa Cruz, and a show on Wednesday night means a relatively small attendance. Their energy was high, and they were friendly as hell—a group of juggalos gave the Orcs a bottle of Jager and a free quarter of weed. FAM-I-LY!—but their numbers just weren’t there.

During the encore set, GWAR has always done horrible covers that they “turn into metallic gold” according to Oderus and on this tour, that montage has been a mix of Billy Ocean’s “Get Outta My Dreams, Get Into my Car” mixed with The Who’s “Baba O’Riley” chorus. The encore is also the infamous moment in every GWAR show when they have their slaves grab some women from the audience and throw them into the giant Meat Grinder on stage with blood spraying the frothing fans.

With such low attendance, nobody had picked out the victims so I suggested Tessara and Maria, which they gladly accepted. The video is posted below. For those of you who know her, Tessara is the first victim.

The load-out was painless and took less than 20 minutes. With our good-byes said, we jumped into the RV, Hulg at the wheel and our GPS set to the Observatory in Santa Anna, Ca.; home of the heatwave, famous for its winds, and only a quick 8.5 hour drive south. Hail GZOROTH!