“Eat Shit & Live” The #1 hit that’s going to send them straight to the top of the cocaine pile! 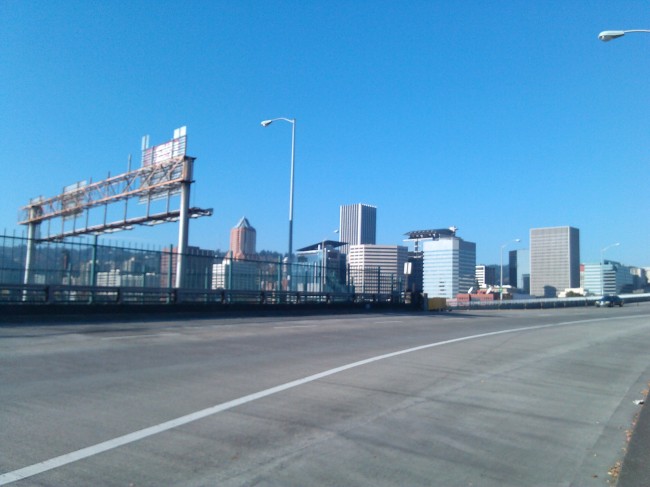 Nestled at the confluence of the Columbia and Willamette rivers, lays the 162-year-old city of Portland, Oregon. Originally inhabited by the Multnomah Indians, the environment provided plenty of fishing, edible plants and berries, and even hunting in the nearby Tualatin Plains, for the local population.

As it usually happens, the natives were driven away by the onset of white pioneers from the Midwest. By 1843, a Tennessean named William Overton had arrived in the area and saw great business potential for the land. White people always seem to look at nature and see “potential” instead of the importance it already possesses. Go figure.

So Overton buys the land for with a business partner, then sells his shares in 1845 for $50 to one Francis W. Pettygrove of Portland, Maine, who had recently moved to Oregon to open a general store. Overton then skips out of state for various parts of his life, ending up in Texas to take care of his sick mother, where he we was rumored to have been hanged.

Pettygrove and Overton’s business associate, Asa Lovejoy, couldn’t agree on what to name the new territory, each wanting to pay homage to their hometowns. As with all brilliant moments in history, the decision was settled by a coin toss. Three years later Pettygrove was one of the richest men in the Oregon Territory.

I don’t think either man ever could have imagined Portland turning into the environmentally friendly, progressive, hipster and delinquent haven it is in 2013. But! I already talked about that in my last post, so onward and upward we go.

The Orcs’ usual load-in time has be 2:30, so we rested for a few hours, eating the catered breakfast provided by the Roseland Theater and Voodoo Donuts. Which, by the way, are as amazing as everyone says. Between the Froot Loop topped donuts, the caramel and Oreo cookie ones and the cock ‘n balls donut (give you a wild guess what it’s shaped like), there’s a cream-filled treat for everyone in the family. Oh yeah, I went there. Rumor has it Voodoo also supplied the cream-filled, chocolate, weed cupcakes at the end of the night, but that is neither here nor there and I’ll get into that later. There was also a cake. 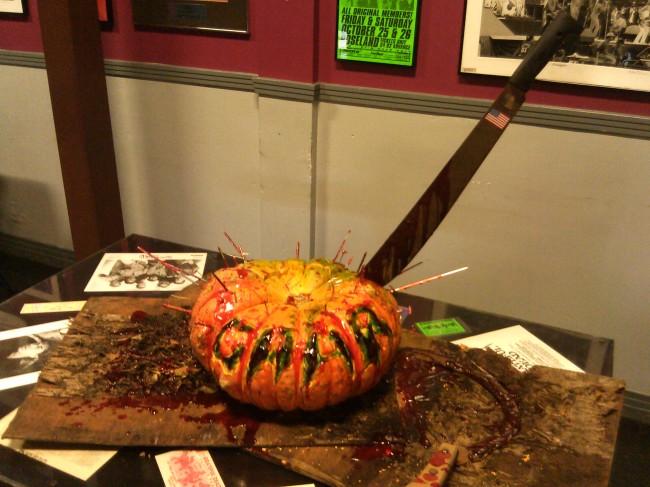 The Roseland Theater itself is a premiere venue for years with a capacity of 1410. Much like the Filmore, its walls are adorned with pictures of a smorgasbord of artists who have played the stage from Frank Zappa to Prince and, of course, GWAR. They have a built-in restaurant where they fed us menu courses like bacon mac ‘n cheese, burgers and mile-high sandwiches. The cheese tortellini with mushroom cream sauce was definitely the best food I’ve had on tour so far. It was even better scarfing it down at the merch table 10 minutes before doors opened.

With a presale of 950 tickets and an eventual 1243 total, the Portland audience was ready for a legendary concert and the bands did not disappoint.

A Band of Orcs shuffled out and blew through their set with an energy that riled up the newly arrived crowd. Immediately when they began the set, a circle pit opened up and kids began thrashing about with an intensity that didn’t break until the Orcs were done. 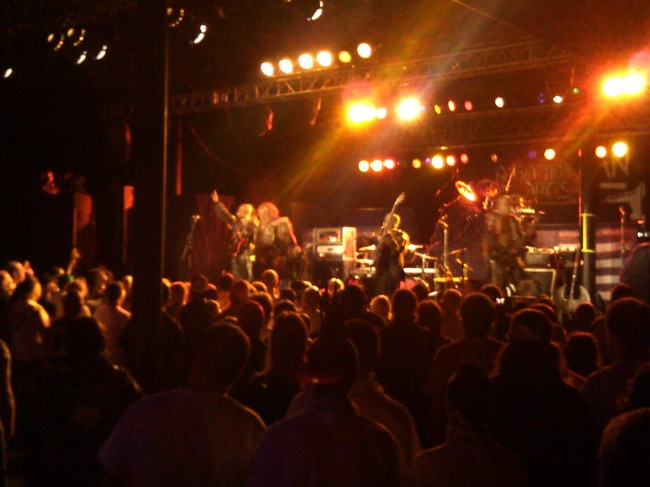 There are three times when the merch booth is busy, the beginning of the night, after the band plays, and the end of the show. Once the Orcs were finished I was swarmed by Portlandians asking about the band, all holding crumpled bills ready for whatever merchandise they could afford. Here’s a typical conversation:

Customer: So where are they from?

Me: Really. Looks like you could use a shirt.

Customer: Naw, I’m just thinking about a sticker. Well, how long does it take them to put all that stuff on?

Me: What stuff? Dude, a shirt last so much longer and you can’t wear a sticker.

Customer: You know, the masks and stuff?

Me: What masks? You sure you don’t want a shirt?

Customer: Ha, uh. . .*realizes he has been defeated* yeah, give me a large. 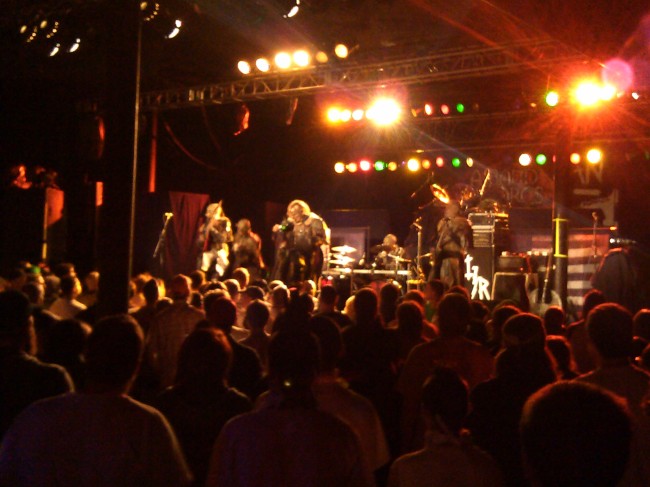 After Iron Reagan and Whitechapel brought the crowd to a whole new level of chaos, it was almost time for GWAR. I was sitting behind the merch table when Jesse walked up to me with a professional-looking, chocolate cupcake in each hand.

“Here,” he said with a suspicious grin, “It’s a special cupcake from Oderus (GWAR lead singer).” Not thinking twice, I unpealed the foil from the stump and bit in.

“Oh shit, they really are special.” I replied tasting that familiar spice of THC. And special they were, within the hour Jesse, Oog, Gogog and myself were watching the spectacular show of lights, blood, crass humor and ridiculously offensive alien costumes on stage; laughing our asses off at the blood-soaked crowd slipping on the floor and making fun of/with the fans in a good-humored way.

Portland is an old GWAR town, and I had a dozen or so people tell me it was their 13th, 16th, or even 20th show. By the third song bodies, legs and shoes were flying through the air, surfing on whatever hands they could find, trying to find the best way in front of the blood cannon on stage.

GWAR held no punches. I know I’ve only been on the road for less than a week but it was easily the most blood I’ve seen them spray on an audience yet. Pools filled the floor afterward and there wasn’t a single white spot of clothing in the building. The band played an extra-long set, bringing out every character they had on the road, giving Portland what it deserved.

Hell, even Leonardo was there. 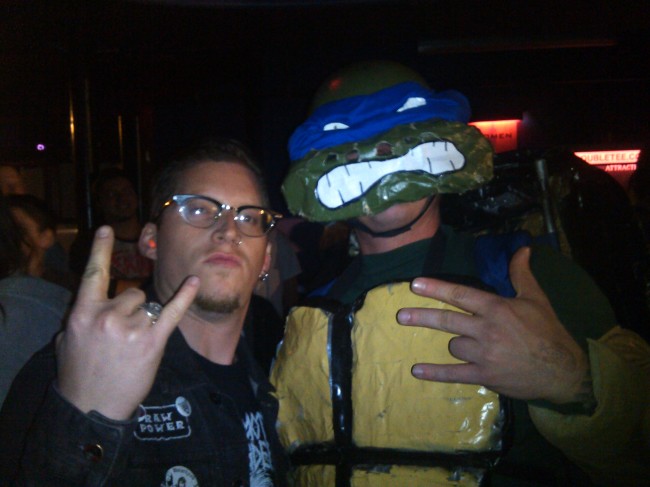 It was a helluva night that ended with the usual quick load-out back to the RV. When we hit the road the cupcake had been working for several hours and it was time to pay homage to the Land of Nod as we coasted down the blacktop back towards our native California.